The Garden is Started 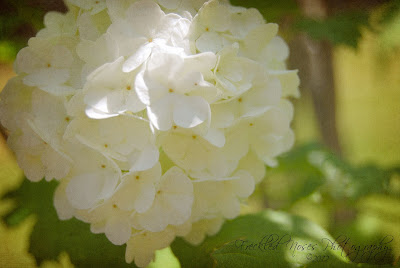 Our lovely little Snowball Bush is blooming.  Love it, so pretty.  Our garden is also doing really well.  I should say, what we have planted so far is doing well. 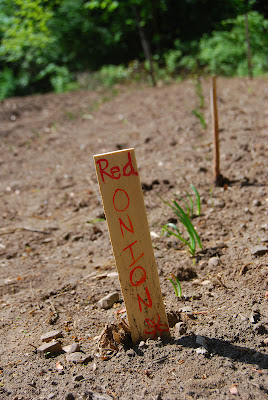 Onions are sprouting.  We tried planting them two different ways this year, so we will see how that goes.  We planted some deep to grow like table onions or green onions and we planted the rest shallow so we can get some nice big onions.

We also switched the garden up a little bit.  Most of the rows are running the same direction this year.  Which means the rows are really, really long!  But I think I like it better so far.  That also means we will be getting much, much more produce this year.  So all you Arizonan's come on up and we will share with ya!

The potatoes are also starting to sprout. 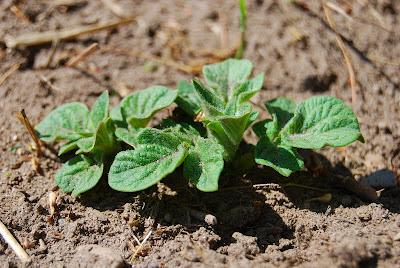 So far that is all that is up.  But those were the first things planted, probably before we will leave most everything else should be popping up to say hello.  Oh, and the garlic, but the garlic is more of an experiment.  I planted them last year without doing any research and discovered I really should read up on stuff before I plant.  Garlic takes a REALLY long time.  So we left it in the ground and it sprouted this spring so we are going to leave it till end of summer and see what happens.  Green beans, green onions, corn, and cilantro are in the ground.  Today and this weekend we will be planting everything else.  That is a long list so I will spare you the details. 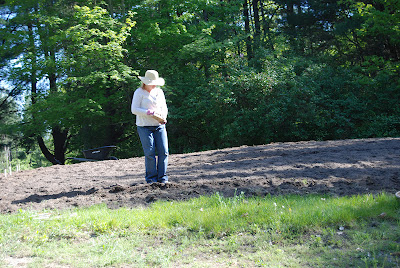 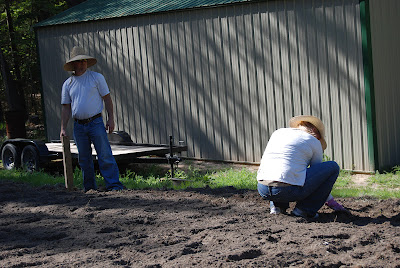 And finally, just for fun, you know us and our weird shaped veggies.  We found a Michigan shaped potato. 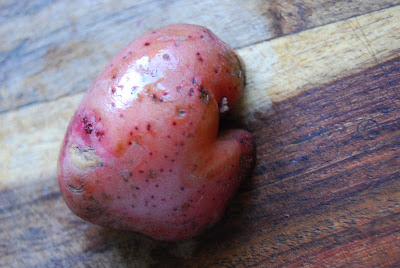 Yep, I know. . . Amazing! :o)  And on that note I am signing off, dinner is waiting to be cooked, seeds are waiting to be planted, and I am waiting to go shopping!  See you all in ONE WEEK!!!!!!

Warm days are officially back!  Yay!  Love the feel of that warm sunshine. 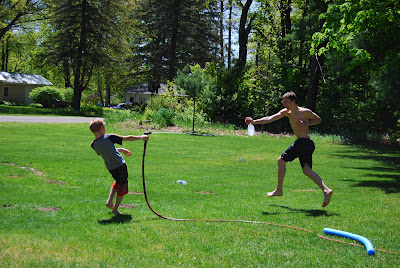 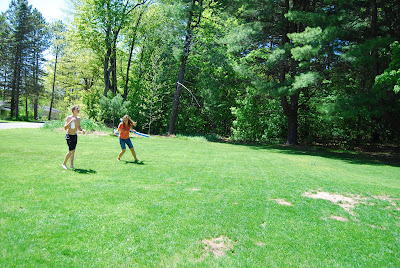 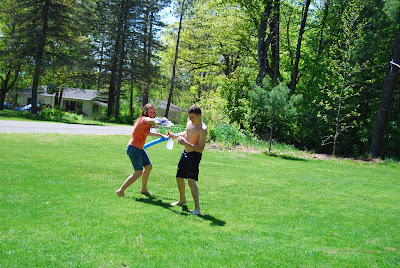 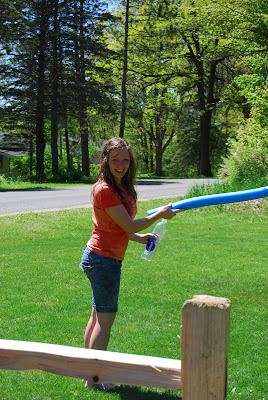 Sunday night we barbequed and then set up the ol' croquet set.  We set it up and played Saturday evening also and Mom kicked butt so we had to have a rematch.  We begged and cried and finally guilted Dad into joining us.  Turns out it wasn't such a great idea.  Sunday night Dad kicked butt.  Guess us young'uns got some practicing to do.﻿ 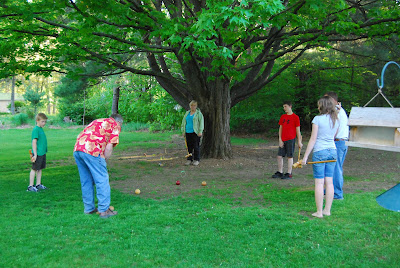 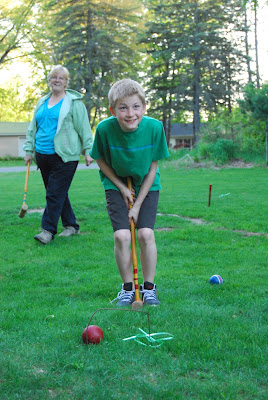 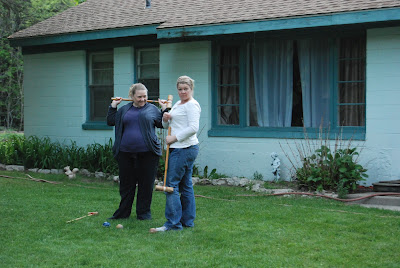 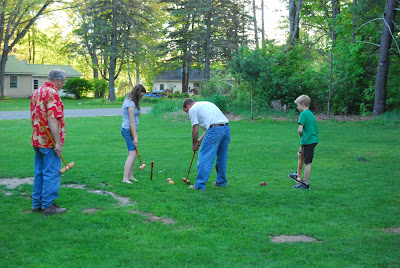 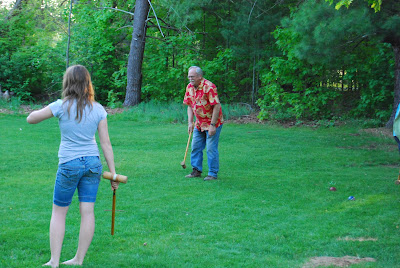 So much fun.  We were having so much fun we forgot to keep an eye on little Roscoe.  So what was he doing while we were all so distractred?  Just like any other kid he was taking advantage of his "free" time. 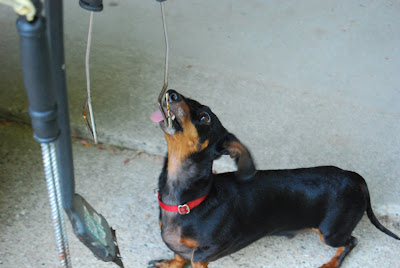 Yep, he discovered the delicious tongs hanging from the grill.  He was a happy little camper until Rachel discovered him.

Spring.  It's a busy time of year around here.  Birds are returning from their warm vacations, animals are crawling out of hybernation, flowers are blooming and the bumble bees have returned to pollenate them, babies are being born, eggs are being laid.  Oh wait, speaking of eggs, here is our slacker. 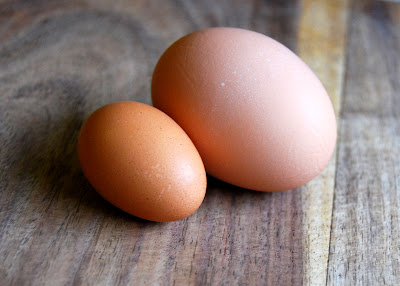 On the right is a normalish size egg that our lovely little chickens usually give to us.  On the left, well, we are not sure what happened.  Did she sneeze and it came out a little early?  Was she just not feeling up to snuff on that particular day?  Who knows but it is the cutest egg we have ever gotten so I guess that counts for something. 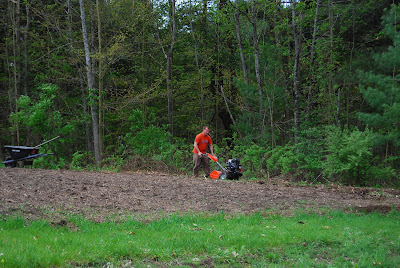 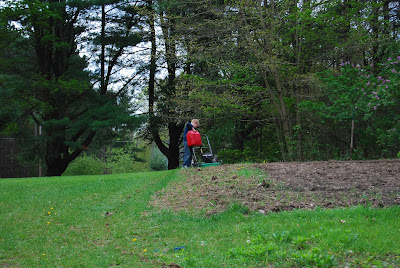 And there are a couple of worker bees.  Yep, its that time of year again.  Garden is getting tilled.  Plans have been drawn, and planting has begun.  This year we have expanded the garden.  Yeay for more space to grow more things, but boo for the extra work this extra space is creating.  I had to recruit some extra help. 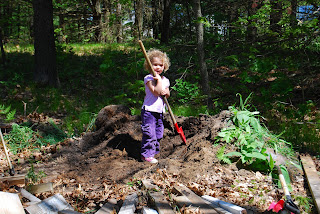 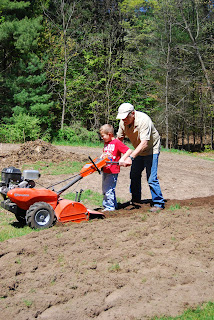 These little cuties are a friends kids that I was watching for the day.  They started out playing outside while Dad and I worked but decided they wanted to help too. 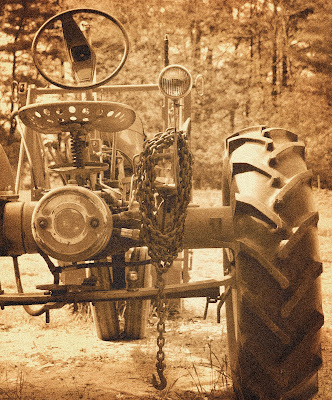 Busy, busy, busy as always.  But we are in a rush to get it all planted before heading to Arizona.  We are so excited to be there.  My lists are started as always and I am driving everyone nuts.  But I hate, HATE, forgetting anything.  Can't wait to see everyone.  Can someone please order cooler weather for the week we will be there please!  Love you all and see you soon.
Posted by Phoebe at 1:44 PM 0 comments

A Different Kind of Job Fair - by Request

This past weekend the kids and I attended the coolest job fair ever!  A spiritual job fair.  A brother and sister in the Big Rapids congregation put it together and brothers and sisters from a lot of different congregations all helped out and made it an event that the kids will remember and hopefully cherish for a very long time.

Unfortunately my flash decided to run out of batteries as soon as we arrived, therefore, pictures are not the greatest.  But the event was so encouraging, I am going to share my poor photos anyway.

Upon arriving, we signed in and each of the kids were given a goodie bag and a "passport".

There was a different booth for many of the different "jobs" you can reach for in Jehovah's organization.  Everything from becoming a publisher, to being a missionary.  Each booth was maned with two brothers and/or sisters who have had the priviledge of actually doing what their booth was about.  The "Serve Where the Need is Great" booth was maned by a sister who has served in a few different countries.  The "Spanish" booth was connected and was maned by a brother who serves in the spanish congregation and also gone to some spanish speaking countries. 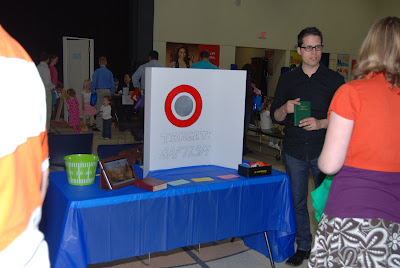 This was the baptism booth.  The brother here had three stacks of questions, beginner, intermediate, and expert.  The kids had to choose a card, answer the question, all of which were taken from the questions for baptism, once they answered correctly there were given three chances to throw a ball into the target.  The brother here pointed out that almost every page in the passport could not be achieved without first getting baptized.
﻿
This brother here is an AMAZING speaker.  He seriously gives the best talks.  He has visited our congregation a few times and always speaks at assemblies and conventions.  And he sounds like Matthew McConaughey to boot.  Win, Win!  He was great with the kids.  He also did part of the second part of the night, which I will get to later.

We spent a lot of time at this booth.  A. has decided she would like to try Sign Language.  So this brother and his brother there next to him were very excited and talked to her a lot about their experience joining the ASL group in Howard City.  The brother the kids are talking to brought along a bible study of his.  A young deaf boy, probably 14 or 15ish.  Later in the day when all the kids were gathered and one of the brothers asked what was the greatest gift they ever recieved, this young boy raised his hand and said his bible study.  Wonderful!


This booth had something the kids really enjoyed.  They had a board with pictures of some of the tracts on the left hand side and on the right were the titles.  They had to first plug into a photo and then plug the other end into the title.  When they got it right they would light up.  Once they got all of them correct a little flashlight popped out with "Shine as Illuminators  Phil 2:15" engraved on one side and "Pioneer" engraved on the other.

This booth was pretty fun.  The kids had to build a lincoln log house just like the model.  They were timed to see who was the fastest.  I am happy to say that I beat (no not literally. . .at least not there) all three of my children.  By a whole 0.7 seconds!

At the end of the evening there was a game of Hollywood Squares.  Our "celebrities" were all either bible characters, early publishers, or current day publishers.  So much fun.  The kids had a blast, although they weren't really getting the idea of the tic-tac-toe part of it because they were all picking random "celebrities" and not really trying to get tic-tac-toe.  Which meant poor, Coleporter Cameron in the middle was not chosen too many times. 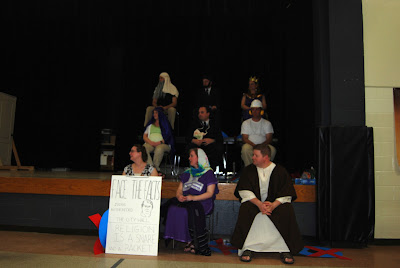 The whole evening was awesome.  I hope when the kids look back on this day that they really appreciate how much time and effort went into this event and are all the more encouraged by what was done for them.  Thank you, thank you, thank you to all the brothers and sisters that did this for our children, and thank you Jehovah for allowing us to be part of such a spectacular organization.

Welcome to my blog. My random thoughts on family life and my new home in the place I love and where I started my life.

All photographs contained in this blog are taken by me (unless otherwise noted) and are copyrighted. Please do not copy or reprint without permission.

Phoebe
Mecosta, Michigan, United States
Welcome to my blog. I am a stay at home mom with three of the most adorable kids on the planet. We recently made a HUGE move from Arizona to Michigan. This blog is for our friends and family we left behind so they can keep track of us as we adjust to country life.